Its time for #fridayintroductions brought weekly by @thetinytwig & @jessaconnolly … A chance to reintroduce yourself to your followers and maybe make some new friends! I’m Denise… I live just outside of Nashville, TN with my musician husband and our two cats. I am born and raised Texan, and am a proud member of the Fightin’ Texas Aggie c/o 2003.

Being married to a touring musician is never boring, and getting through the crazy life we live requires a sense of humor and a LOT of Faith. And lately, my faith is being tested. Give it to God and let go is hard sometimes, but its always rewarding and comforting, too.

Today’s question is what is my favorite flower… I am a serious sucker for a dark red rose, but in the spring its easily the beautiful Texas Bluebonnet!

I’ve been missing mostly because my heart hasn’t been in blogging lately. (Though my photography is doing pretty well, and I’ll have some photo posts coming up soon.)  Primarily because I’ve had a really hard time being my positive self. I’ve found myself, at heart, feeling very negative.

And I am very embarrassed to say its had to do a LOT with money.  The past year was a very fruitful one for us, but I knew the whole time we’d reach a wall and be back into the paycheck-to-paycheck life. Its actually a very blunt and harsh reality of the “musician life.” Its feast or famine. Last year the famine time was short, and as an added bonus I was bartending regularly. This year? That slack is gone, and the famine time is extra scary.

God somehow always provides. And I’m usually very good about the whole, “Everything happens for a reason and it all works out in the end.” way of life. “Give it to God,” its a great mantra for the “musician life.”

But as I said in my #FridayIntroductions this week, I’ve struggled with that lately. And with that struggle, I find myself just shutting down. I find myself without motivation to work and correct where we are right now.

Friday night, my husband played a gig on Broadway in downtown Nashville. He hasn’t played Broadway in, literally, years.  Perhaps I should have looked at the gig as one of God’s little whispers of, “I got this…” but at the time it just felt so strange.  (It didn’t help that I had to deal with a negative an hateful Longhorn fan on the street that just left me even MORE out of sorts for a long time. Sigh.)

Then after my husband’s gig, we went out to see friends play. And it was then and there that I got the attitude adjustment I needed. We were surrounded by so many friends who embraced us and unknowingly gave me the lift I needed. All these people face the same frustrations and same struggles that we do. The exact same ones. All these friends live this “musician life” with optimism and positivity that I needed an injection of in that moment.

We WILL land on our feet. I am thankful to all who support us in numerous and priceless ways. We all lean on each other, and we all get through it together. Isn’t that the way it is supposed to be? 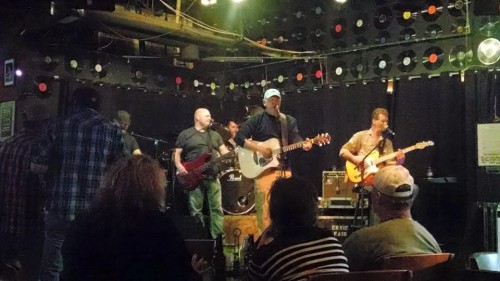 One thought on “Sometimes I struggle”