I’ve learned more and more recently that there is a serious strength in numbers, and I find myself spending a majority of my time online chatting in one Facebook group or another.

One group that I am extremely proud and honored to be a part of is Road Widows. We are the wives (fiances, long-time girlfriends, etc.) of men who play music or work as crew guys on the road. My husband being a touring musician is what spurred the name of THIS blog, and Road Widows just expounds on it. We use the name much like there are “golf widows” and “hunting widows.” (A legitimate use of the word “widow” from the dictionary!!) We are happily married, but we’ve also learned how to manage everything on our own.

The women who participate and draw strength from our group inspire me, and they keep me wanting to keep the group going. The women who come to us in the dark days — the days they aren’t sure they can stand by their man any more as he travels the country (or the world!) for work — and suddenly no longer feel lonely and find the way to push through the darkness.

Now, there is a little irony in the timing of what happened this week, as we (the writers for the Road Widows blog) had just decided to migrate from a Facebook page (public) to a private group where all the women could talk freely and openly without fear of judgement or attack. Where they can talk fans, fears and loneliness. We’ve all grown so busy that getting together in person has become a juggle, so perhaps instead of dishing over margaritas and tacos, we can dish in our down time online.

The very day we announced the creation of the private group, we dealt with what I can only describe as an Internet Bully. A troll, perhaps. But for me, it was a classic bully.

…please, do your doomed selves a HUGE favor, and quit considering yourselves as being the victim. You are your own worst enemy.

My head was spinning.

This page is an insult to touring musicians…

Okay now I was angry.

The post was quickly followed by a barrage of comments from what I assume are friends of the original poster supporting their point of view and further hammering nails into my heart.

I was angry. I wanted to sob my heart out. I wanted to scream at these people and call them names. (Okay, I totally did just that to my poor husband who became my sounding board.) This group I am so passionate about and love deeply was being insulted and attacked viciously. Why? Because they saw the word “widow” and took it very, very literally.

Instead, I took a deep breath and tried to take the high road. My fellow contributors did the same. We responded as tactfully as possible, but we also didn’t lie down and just take it. Nor did we ignore it. Eventually, our followers started to chime in and the tide began to turn. The love and support began to drown out the negative words.

This page brought me help when I struggled hardest…

Yes! This! I swear if I wrote a mission statement for our group it would be to do just that.

I think it’s great to have a safe place to look and see that we are not the only crazy ones that have chosen this lifestyle.

And of course there is that, too.

I find great support and understanding in this page. I genuine thank you for creating it and being proud of it enough to share it.

We aren’t sure when or why the original post was deleted. I only have the text from having saved it prior to it being deleted. I like to think the positive completely drowned out the negative.  I like to think that the fact that we didn’t shut up but instead stood up for ourselves was an unexpected reaction.

Together we are stronger when we lift each other up. And this amazing, amazing group of women did just that this week and continue to do so every day. We are strong. We are confident. We are incredible.

How have you handled people in the past that decided to judge and critique you without bothering to know you? Did you have a support system to “have your back” in such a case?

In 1 Week, Hundreds of Women Stood Up to Change the News. You Can, Too.

Bullying. It’s a HUGE topic in the news today. The government has even set up a web-site and an initiative to stop bullying in schools.

From that web-site, bullying is defined as:

Bullying is unwanted, aggressive behavior among school aged children that involves a real or perceived power imbalance. The behavior is repeated, or has the potential to be repeated, over time.

I actually like Wikipedia’s description a lot better, which admits bullying can happen at any age. Bullying can occur in any context in which human beings interact with each other. This includes school, church, family, the workplace, home, and neighborhoods. It is even a common push factor in migration. Bullying can exist between social groups, social classes, and even between countries.

This week, a big item in the news has been about Jennifer Livingston’s segment on a Wisconsin news station addressing a man who sent her an email criticizing her weight. From that email: Surely you don’t consider yourself a suitable example for this community’s young people, girls in particular. Obesity is one of the worst choices a person can make and one of the most dangerous habits to maintain.

Livingston chose to address that email by tying it into October being Anti-Bullying month. She encouraged young people to not let emails and comments like the ones she received bring them down. Her statement, “You don’t know me. You are not a friend of mine. You are not a part of my family, and you have admitted you don’t watch this show.  You know nothing about me but what you see on the outside.” really resonated with me. 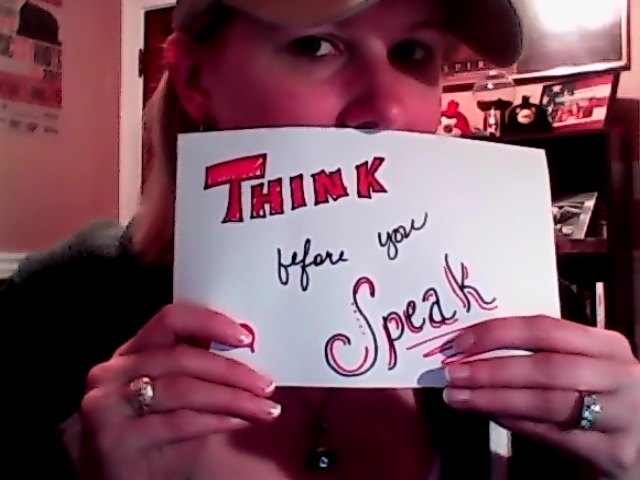 Whether or not the original email was actually a “bullying” action or just someone being critical or judgmental is up to debate. The fact remains, this man judged Livingston based on her outward appearance without knowing her personal story.

I hope my family does not mind my recounting this story (and I’ll probably get elements of it wrong, and for that I do apologize, but you’ll still get the gist of what happened.) I’ve mentioned many times in this blog that my nephew has Muscular Dystrophy. Part of his regimen of drugs and exercises and dietary restrictions to help slow the progress of his MD is that he takes steroids every day. And anyone who has ever had to take steroids for any medical reason knows, steroids will make you gain weight.

I still remember the anger that filled me when my mom told me about the night that apparently a man dared to tell my nephew he should probably lay off the french fries while at Dairy Queen, telling him it looked like he’d had plenty already. To this day I wish I could look that man in the eye and tell him what a judgmental and ignorant #@$#&* he is. To say that to ANY child in the first place makes this “man” very small, but to say it without knowing the person and their story makes it 10,000x worse.

When I heard the story of this reporter, I was reminded of that story with my nephew. Some people have medical reasons for weighing what they do. For others, it is just genetics. They can diet and exercise every single day, and they will never be a size 4. (Hey, in contrast, in high school I couldn’t get health insurance because they said I was “too thin” and clearly must be sick or something. Nope. Nor did I diet. Heck, I ate crap all the time! I just had that fast of a metabolism and couldn’t gain weight if I tried.)

For me personally, I’ve only dealt with anyone asking me if I am pregnant when I put a few pounds on… because I always carry the majority of my weight in my abdomen. Its the bane of my figure. I know this. But it still stings when someone asks, because for me it might as well be, “Hey why don’t you go do some sit-ups or something.” (Seriously, though, do I REALLY need to say its not smart to ask a woman if she’s pregnant or when she is due?)

But at the same time, when I say I am not, it is followed with, “Well when are you guys going to have kids?” This question is, for me, just downright rude. While I appreciate friends with kids telling me that having kids is the best thing they ever did, and while I know I’ll love it as well, I also appreciate people respecting that my husband and I are happy as we are and that we will have children when we are ready. And THAT decision is ours alone.

However, even more, I know too many women who are dealing with infertility to not find that question to be potentially very hurtful. I also know a lot of women who will wait to tell anyone they are pregnant, and if a miscarriage occurs — consider what kind of a knife it could be to that women’s heart if you go, “So, hey, when are you guys having kids?” if she just lost a baby?

YOU DON’T KNOW because a couple choosing to have a baby is a personal decision — not a group or community decision. Stop trying to meddle into that decision making.  (Or, if you will, stop trying to bully them into having children just to make you happy for them.)

I am not against criticism. You can learn a lot from criticism, and life will hand you countless opportunities to be criticized. Be it for a job not-so-well done, or going jeans shopping with your best friend. But criticism done out of “looking at the cover without reading the book” can easily be perceived as bullying.

As we work this month to fight bullying, can we also just fight to, “Think before you speak?”