This is the last week before April 15th, and I’m pretty out of it come the end of the day. Between tax season and Muster planning, my plate is overflowing. I need to get some sleep (its only 3:30 am!) but I just couldn’t let another day pass without a post!

Last Friday, I drove down to San Antonio to see my husband for awhile. I loaded the address of the venue they were playing into my phone’s GPS and away I went.

I knew there was one section of the route that the GPS wanted me to take that I did NOT want to follow. For whatever reason, Google Maps likes taking me as the crow flies, which in Texas usually means ending up on little Farm-to-Market roads in the middle of nowhere. That can be fun and all, but when you’re hitting those areas after 3 pm, you’re subject to school buses on top of the already lower speed limit. It is NOT the fastest route, no matter what Google seems to think.

Unfortunately, the location of my “don’t-go-the-way-the-GPS-says” was in a town I’ve gotten lost in more times in my life than I care to admit. Its seriously my Bermuda triangle. It’s sad, really. And just as I feared, I got all turned around and nothing looked right to me. I ultimately ended up following my GPS down lots of little FM roads, with lots of local Sheriffs looking to help their county pocketbooks, instead of hitting the tollroad with a speed limit of 85 mph. (C’mon Google maps. You can NOT tell me that going 55 down little two-lane roads as the crow flies is faster than hitting a 3 lane toll road going 85.)

Once I finally hit the tollroad, I was good to go. Or so I thought. My GPS kept telling me I’d be exiting onto “183” or something like that, so I kept an eye open for that. I was coming up on a split, and I moved over to stay on the tollroad I was on… it wasn’t until I was committed to that stretch of road that my GPS told me to “stay right at the split” forcing me to miss yet another turn and dropping me onto a totally different state highway in 5 o’clock traffic and sitting through stoplights three or four times.

My 2.5 hour drive turned into almost 3.5, and my nerves were SHOT. (I am not even going to go into the idiots I dealt with… like the guy who blew through the yield sign and that I almost made pee himself when I laid on my horn as I avoided t-boning him… thank God I had slowed down from the 85 mph I’d been doing in anticipation for his stupidity.) 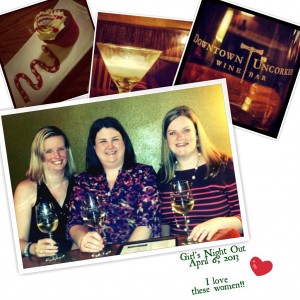 Luckily my Saturday went much better. Travel was a breeze and I got to spend the evening with my (to be a cliche teenager) BFFs.

I LOVE THESE WOMEN.

I am blessed with two amazing women that I call both best friend. One I’ve known since Kindergarten with a history that’s impossible to ignore, the other that amazing college friend that you know you’ll have rest of your life. Both like sisters to me, I cherish every time we can make it work to get together.

Our venue this weekend was downtown Bryan, TX. It’s definitely a place made for people our age, and it was just such a refreshing change of pace for me. I love my bars in Nashville, don’t get me wrong! But the class of the place and area was just… refreshing. I always say I can hang in a dive bar and be happy just as fast as I can dress up and hang in a fancy restaurant and be happy.

But the best part of our venue choice was that we were able to sit around a table, drinking wine, talking for hours on end without interruption. Another friend joined us for awhile — one I haven’t seen in 5 years — and it was such a treat to catch up with her as well!  The night was so very good for the soul, and I really hated to see it end. I already look forward to next time!

Sunday night brought the ACM awards. I’m not going to comment too much on it. I just know it left me very sad… sad of the state of the industry that I love so much.

I seriously feel like the class and respect it demanded all through the years has diminished to catering to… to… what I don’t even know. I work in a bar. I can take dirty jokes. But I was put out with the number of them thrown through the night. I remember when it was more about honoring the greats of country, not doing whatever it takes strictly to get ratings.  I remember looking forward to awards night, glued to the TV. Now, I force myself to watch, and I end it wondering why I bothered.

My biggest complaint since last year is making the “Entertainer of the Year” award fan-voted. There are fan-voted award shows already. Keep this one strictly Academy voted. To me, making the top award fan-voted dilutes it down and makes it just another popularity contest. I happen to be one of the few people who might not be a Taylor Swift fan, but for several years championed her getting the Entertainer award… because she IS an Entertainer. And it doesn’t matter my personal opinion of Blake Shelton, he’s become the current face of country. He’s the one people associate with the genre now. He deserved it, too. These are the angles that the Academy would vote from… or at least SHOULD vote from… in my personal opinion. (And yes, these are MY opinions, not anyone else’s.)

Finally, I got to watch my niece play ball tonight. She’s a fierce softball player, and I think it is going to carry her far. Her team (Born to Win aka BTW) was taking on a team the next town over.

What a game! I have to say, its getting more and more fun to go to games as she gets older. They ended up playing an extra inning due to it being tied, but had to call it when it got too dark to play safely. It was like being left with a major cliffhanger… they were ONE out away from winning the game… or one batter away from losing it. I like to go with the first one, though.

I hope someone lets me know how it ends when the finally get to finish playing!

I was afraid this would be the only game I’d get to see, since the season started so late this year. But it looks like I’ll get to catch one more on Monday before I head back home to Nashville. Here’s hoping for a win! What a lot of people don’t know is that a big part of how my husband and I moved past just being friends to “something more” was thanks to hours on end talking on the phone as he drove a tour bus from one venue to another.

He was, at that time, the only bus driver for the artist he was also playing keys for… which made for long days! So as he drove through the night, to help the time pass and to help him stay awake, he’d put on a headset and call friends from the road. Being the fellow night owl, I was the last person on that list and we’d end up talking for hours through the night. It wasn’t unusual for us to talk three to four hours, only hanging up because he had pulled up to his destination.

The thing that blew us both away was how in those hours, we never got tired of talking to each other. Some nights it wasn’t much more than what he was seeing from his driver seat, but we had no interest in hanging up  the phone. Some nights, we’d share stories about our pasts, and others we’d have a lively debate about a topic. It didn’t matter what we talked about, and we never sweated what we’d say. We just fell in line with each other every time, night after night.

Married now, we thankfully still never tire of talking to each other. However, over the last several years, the opportunity to talk all night like we did back then hasn’t presented itself as much. (Oh don’t get me wrong, we could talk all night in person, but the old way of “on the phone while he drives” is the way I mean.)

Lately, though, my husband has been doing more driving than playing, which has provided us that old way of visiting again. Take the other night, for example. We talked for about four hours on the phone. At times, we sat in silence — him watching the road come at him, me playing solitaire on my laptop — but it never took long for something to hit one of us that we just had to share.

I couldn’t hold my eyes open any more when we called it a night. He was stopping to fuel the bus, and it was time for me to fuel my body with sleep. We said good night, his with a “rest well,” mine with a “be safe.” I fell asleep with a smile on my face… knowing we’d do it all over again the next night.