I have never watched any of the “Real Housewives of…” shows. Never cared to… too far out of reality for me. I’ve never watched any show that follows people around and documents their “real life.” (Okay, fine, maybe I have watched a few episodes of Gene Simmons Family Jewels. And I might have endured one or two episodes of Newlyweds — remember that one?)

When I stumbled upon the Road Widows blog and started contributing, I briefly wondered why CMT doesn’t do a “Real Road Widows of Music City” or something. That could be really cool, I thought. Heck, I’d be happy to contribute to it!

I’ve chewed on this idea a few times. How would that work? I guess you’d probably focus on the wives of the artists for the biggest ratings, but what about us wives of the side guys?  I know some great women that could be featured. It could be pretty cool.

Then, as I lay in bed one night, trying to turn the brain off so I could sleep (husband snoring softly beside me… dammit, I thought, I want to sleep, too!) it hit me. It would probably be one a boring show in comparison to its reality tv peers.

See, us road widows… we aren’t generally an outlandish bunch. Many of us have regular ol’ day jobs. Others of us are your typical stay at home moms (albeit part time single-parents.) We are all more focused on putting food on the table than shopping for designer dresses and shoes. We live a life a lot closer to reality than those typical “reality” TV shows portray. It is within that that it really wouldn’t be exciting. It might pass more as educational. Recipes for one. Budgeting. How to fly solo to events. Building your own support system outside of your marriage. Balancing the craziness of “the life” with “the normal world.”

Oh sure, there would be your cool out-of-the ordinary moments. The occasional awards show. CD release parties. A glimpse at hanging backstage before a concert. (Newsflash: Soundcheck is usually pretty boring, and you do a whole lot of hurry up and waiting. Though my personal drama tends to deal with security guards on a power trip.) You could spice it all up here and there! 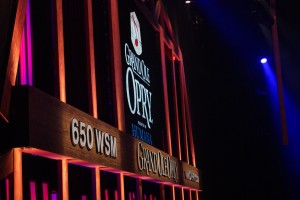 I’ve been down in Texas working most of the last two months. In a week, I fly back to work another 3-4 weeks as we finish out the income tax filing season.

But for right now, I am home in Nashville, spending time with my husband. Tonight, I got to dip my toes back into our life with his playing the Grand Ole Opry and heading out on the road for a one-off to Florida. (One-off being the term for one-show in a run.)

First, I LOVE THE GRAND OLE OPRY. Its seriously one of the only places I would drop pretty much everything to go to work for… The people. The vibe. The history. Everything about it just feels like a great big hug to me when I walk through those doors of the Opry House.

As an added bonus tonight, one of my husband’s former employers was on the bill as well. So it was big hugs to old friends in that camp as well, most of which I literally haven’t seen in well over a year — if not almost two years!

Second, I absolutely love everyone my husband works with. I really do! Its such a cool hang, and everyone treats me as one of the group. I totally put my hair down around them and its just like a big family… one that runs down the road at 65 mph in a big tour bus.

And even though allergies are seriously kicking my butt, and today they really got me down, I left the Opry House tonight with a spring in my step.

Oh don’t get me wrong… I thoroughly enjoy the work I’m doing in Texas. And getting to spend so much quality time with my parents is priceless. But it was SO nice to be reminded that this crazy life my husband and I live is always there, always comfortable, and its always waiting for me with open arms when I get back home.