Last week, my husband and I got new phones. We were at the point where we had zero choice. Our old phones had reached self-destruct level. And by that I mean, one of us would probably soon be running over the phone with our truck just to feel better after all the frustration it had been causing us. I wouldn’t wish that old phone on my worst enemy. (Even the guy at the store who was trying to get my contacts transferred over was amazed at how crappy my old phone was…)

I walked into the store, determined to get an iPhone. I have my iPad and I love it. I also sometimes feel a little bi-polar going from iOS to Android and back when going from phone to iPad. I’d really grown to love a lot of features provided by iOS and had just decided I was DONE with Android.

Until I walked into the store and spoke with the sale associate. Who after a lot of discussion convinced me to stay with Android. He, too, has an iPad and could totally understand my… not really frustration, but kinda like frustration, that I feel going between the two systems. However, he showed me a lot of features on the new Android operating system (Kit Kat, baby!) as well as with the new version of our old phone (Droid RAZR) that sold me on staying with Android.

So I am new owner of a RAZR MAXX and I’ve officially fallen in love with it. And here arefive reasons why that is… 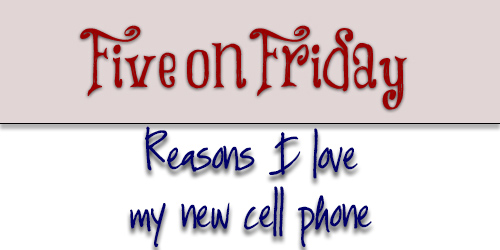 1. Camera access ease. This was the thing that sent me over the edge to get the phone. As a photographer, I love capturing images throughout the day. I’ve discovered I’m a very visual person, and as such I am the person snapping a photo of their food or drink if its exceptionally good. The weather, my hair, the dog, the cat or a car passing by me are all potential photo ops. I want a camera that will respond when I want to take a photo. THIS one does. Even if the phone is asleep, I just shake it twice and the  camera launches. No more missed photos due to phone lag and unlocking! 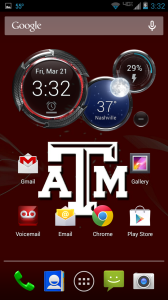 2. Battery life. My biggest complaint for the last several years is the sheer crappiness of cell phone batteries. Why do I have to carry my charger around 24/7 and hope I can charge it before the day is less than half over!? This new phone… we popped for the one with the larger battery. Check out this battery life to the left…

I JUST plugged my phone in for the first time in 16 hours. This is after multiple photos, tweets, Instagrams, web searching, and phone calls. This is after text messages, jumping on and off various WiFi providers, and tinkering with phone settings through the day.

THIS is what a cell battery should be like.

3. Familiarity. I’ve been using the Android system for… years. I’m familiar with it. In fact I was able to keep my same text tone as my last phone. And the wallpaper is one I used on my first Droid ever. I’m able to keep my calendar widget (which I use daily) and it had saved in the Play Store all the apps I’d ever downloaded, making it super easy to set this new phone up with what I use and need. 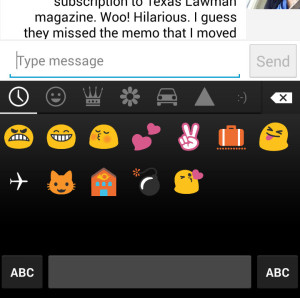 4. Emoticons! I know this is a silly thing to be so excited about, but I am. iOS you can download and install Emojis. Which is fun and all, but us Android users for a long time now only saw little squares where fun hearts and notes and smilies and whatnot showed for iOS users. Now? Now we have emoticons. Amusingly, they are the same but markedly different from the Emojis on iOS. So if I do a peace sign on my phone, it shows up different to someone on an iPhone. But its the same idea, nonetheless. Brilliant.

5. Screencaps. It’s a petty thing, but I have been sorely annoyed at my inability to take screencaps of my phone since my first smartphone. A major fail, in my opinion, was the Android system not making that possible. I’d look at my fellow smartphone users using iPhones with jealousy over that ONE feature. Now? Well now I can take screencaps. And I love it. It’s like Android took all my favorite iOS features, tweaked them to be definitively Android/Google-esque, and gave me everything I could have wanted. And that makes me a happy woman.

For a period of time, while I was keeping my LiveJournal up daily, I would participate in The Friday Five. I decided this week to see if it still existed and to my delight it does! So today I bring to this blog my answers to this week’s Friday Five questions.

I very much enjoy flying! I occasionally will reach a point when I just have the urge to fly somewhere. Anywhere. It’s just fun to look down from the skies on the Earth and marvel over how small we truly are. However, with the cost of flying, the security fears, and all those ridiculous fees… give me a road trip any day! Plus, I prefer to have more control over when I go, where I go, and how fast I get there.

2) Where is the northernmost place you’ve traveled? The southernmost?

3) What is the last place you visited for the first time?

4) Of all the places you’ve traveled, which is your favorite?

5) Where would you most like to travel to next?

I have so many places I want to travel to see! Right now? I am trying to plan a trip down to Texas again. Hopefully for a special day coming up next month. Everyone cross your fingers!!