This week has been one for the record books for me. Simply due to how “different” it really was from beginning to end.

Many probably don’t know that I work at a hot dog stand in a bar in downtown Nashville for extra money. It’s a fun job and I get to listen to amazing live music, have a drink if I want one, and meet all kinds of interesting people. Not a bad day at work!

However, the week was kicked off with a strange Sunday in which the downtown in general was just dead. Not even Broadway could boast much of a “crowd.” And adding to the strange quiet of downtown, our full band didn’t start until midnight! Ultimately, I think those of us working agreed that we should have just closed early and cut our losses. Surely Monday would be better.

A torrential downpour left my husband and I doing 20 mph on the Interstate as debris from trees swirled through the air, and our ability to see ahead of us was diminished down to a few feet. Once the storm cleared and we were able to go again at a normal pace, a woman in an SUV pulled out in front of us. She merged onto the Interstate, crossed two lanes into our lane, doing maybe 40 while we were going 70. It was physically impossible for us to slow fast enough to not rear end her, and I’m still thankful the next lane over was empty and we could swerve around her. Its not the first time that’s happened on a Nashville interstate to us (apparently checking to see if a lane is clear is not necessary, and turn signals don’t come standard on vehicles here) but it never ceases to leave my heart pounding wildly.

That evening’s highlight was getting to have dinner with my husband at his lodge meeting before going to work. THAT was a treat. Work, however, was simply bizarre again. Downtown was once again pretty much dead, but the city’s homeless were moving around a lot.

The night ended with a homeless woman rushing into the bar demanding that I call 9-1-1, because “he’s laying on the steps bleeding! He’s all beat up!” The woman said she and this man had only been in Nashville three days. However, she could not tell us who or where “he” was. My husband went with her to look, but came up with no one.

About half an hour later, the lady came back hysterical again to call 9-1-1. This time, my husband and the lead singer of our night’s entertainment went with her together to hunt for her friend. They did find the man this time, looking like he’d been beaten up and passed out in an alley.  My husband called for help, and soon three police cars, firetrucks and an ambulance appeared to help the man. I do hope the man and woman are all right, but I also hope to not go through that scavenger hunt again any time soon.

Things looked up come Tuesday. My husband sold a piece of gear and a roadcase he’d been trying to sell for awhile. I got the oil changed in my truck for a better price than I had anticipated it costing. And we arrived downtown for my husband to play the late shift to discover a music video being filmed outside the bar. The bonus was that I got asked to be an extra in the video! Definitely not your typical night out! Everyone has their list of things they want to do someday. A deep secret dream of mine has been to be in a music video. Now I can say I have!

Wednesday was gloriously normal. Thursday, I flew to Texas for a visit with my family. My husband jumped in a tour bus and headed north to Iowa and Wisconsin. Definitely a case of our going opposite directions! Not the first time. Nor will it be the last. (I can’t leave out that Thursday was also the day that Farrah Fawcett and Michael Jackson both passed away, leaving the news world spinning as well.)

To round out the week came Saturday. I had tickets, thanks to a friend, to see a Texas artist do a show in Waco. However, I was not aware it was an outdoor show until the night before. My parents and I went, but ended up not staying. The heat was just too much for all of us. (I suppose on my part, it also doesn’t help that I’ve admittedly gotten a bit spoiled to having a cool tour bus to hide out in at outdoor shows when I go see my husband play a show!) The inside of the club was reserved for VIP ticket holders, and with General Admission tickets we couldn’t go inside. So without reprieve from the heat, we left not long after the music had started.

Strange for me to not stay for a concert! But this year’s summer in Texas is setting record highs… and I suppose that in and of itself tops out a very different week for me. One for the books.

Or atleast for this blog. 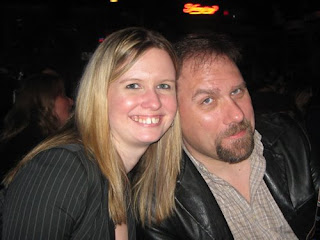 When I was in high school and college, I used to joke that I was “a tax season orphan.” Today, my husband could rightfully call himself “a tax season widower.”

My parents have owned their own bookkeeping and tax preparation business for over 20 years. It’s perhaps pretty obvious and natural that I’d work for them through the years, and despite the fact that I majored in Journalism (and my passion lies in the arts) I continue to work the family business. And I truly do enjoy the work I do for them. It can really be a lot of fun!

The last few years, my work time has been focused on that final push of the season. The time when we have people in and out of the office constantly, and the time when the most returns are being completed a day. This year, I’ve alternated three weeks in Texas, one/two weeks in Nashville, then back to Texas another three weeks. I arrived back this last weekend to finish out the season.

Meanwhile, I am actively planning Muster for the Middle-Tennessee A&M Club. Everything, so far, seems to be falling into place beautifully. Which, I admit, makes me a little nervous. When it all falls together this well, I don’t feel as prepared for any “disasters” that could occur the day-of the event. Then again, I feel like I’m getting really good at planning things, so maybe its falling together just because its becoming old-hat to me? Who knows. Nonetheless, I am VERY excited for it all. I so love the tradition of Muster. It is without a doubt my favorite tradition of them all.

Easter is approaching!! I’m excited Craig will be down to spend it with us. THAT will make the day complete. Counting down for it, for sure.

The warmer temperatures of Spring are already making me itch for Summer. Actually, I wouldn’t mind skipping Spring just to avoid the tornado outbreaks that have already begun. I may have grown up dealing with them, but I will never be used to it. How can you be? They’re terrifying, how random they are.

But as I said, summer is approaching and that means… Craig will be on road a majority of the time. I get home in time for him to head out for work. That’s just the way it lands… bummer! We’ll make the most of our time as we have it, of course. We always say that we appreciate our time together more due to all the time apart, and we most definitely do. We don’t LIKE being apart as much as we are, but we make it work. It’s just the way our life rolls.

And honestly… I love my life. More than I can say.