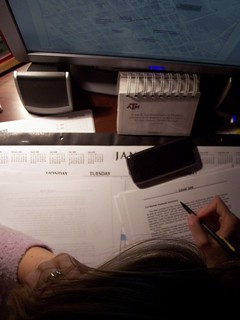 Every year, I come down to Texas to help my parents in their tax return preparation business. In the past, I would at times meet with clients myself when they’d come in and drop off or pick up their work. The last couple of years, though, I’m happily tucked in the back of the office just putting files in order. My incognito location allows me the freedom to observe human nature, and over the last few days I’ve found myself honing in on fellow women and their demeanor as they come to our office.

And I’ve found something very alarming: I find myself tensing up when another woman walks in the building.

Every job I’ve had out in the workforce, I’ve had a female boss. And its always, on a whole, gone well! So I know I can work with other women. I work better, I think, with women than I do with men. I embrace other women in business. I cheer for them.

I also find myself dreading them. And I absolutely hate that fact.

Many women who walk into our office have no clue what goes into their finances and absolutely no interest in knowing.

They’re women whose husbands have done all the finances for years. Many of these women are widows, and they don’t know which way to turn.  There is the mute wife, who stands by while her husband runs the show. Sometimes I don’t even know the wife was there because they never say a word.

Others are super busy women  that show up with a box full of every receipt they got over the last year, and they want someone else to organize it and make sense of it. They give it to us in chaos and they expect it back in order.

Now, before I go any further, this issue is not really only a woman-thing. We have plenty of men we deal with who will act the same way. I’ve just noticed, though, that this trait tends to be more women-centric.

But its the confident business woman who is a breath of fresh air. She relaxes my tensed up muscles with a smile and respectful conversation. She makes me smile as well and WANT to work with her. She asks questions when she doesn’t know something, and she will happily and respectfully inform you of things you need to know.

I recently read several articles about the traits of successful women. The ones that rang the most true to me:

– Successful women know they aren’t perfect, nor do they expect perfection. But they work to the best of their abilities and ask that of others. They know we all have our strengths and they work those strengths for the betterment of everyone involved.

– They know failure does not mean its the end game. It means its time to change course and try another way. Failure is as much a part of life as success.

– They praise and celebrate others successes. They are just as comfortable taking a backseat to any project as they are taking the lead on it. They say thank you. They nurture and grow relationships — professionally as well as personally.

-They know they aren’t going to please everyone. Ever. They know employees aren’t (necessarily) friends. They aren’t afraid to say, “No.”

– They believe in themselves. We’re our own worst critic, but we should also be our own biggest cheerleader.

– They aren’t afraid to ask questions. They know that sometimes you have to “look dumb” for a minute to become wiser.

I’m sure many women have opinions as to what traits makes a women successful, and I’d LOVE to hear your thoughts. Tell me more… lets be part of the conversation empowering women in a positive way.

#WomensLives is a media partnership between Public Radio International (PRI) and SheKnows Media, BlogHer‘s parent company, aiming to change the portrayal and coverage of women in media.