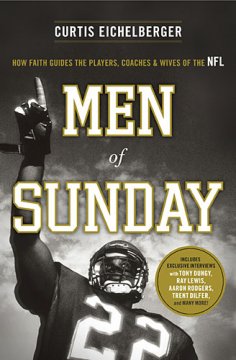 I requested to read and review Men of Sunday: How Faith Guides the Players, Coaches, and Wives of the NFL

by Curtis Eichelberger near the end of the last football season. It’s taken me awhile to finish it, but the start of the 2013-14 football season seemed like a prefect time to bring this book back out.

Men of Sunday is a really interesting read as it looks at the place faith in God takes in the world of those in the NFL. For me, it was a comforting discovery as a Christian and a fan of football, because I have struggled many times with the way it often feels like football trumps God in the lives of many as soon as the season begins.

It didn’t take long to get sucked into the book, and it  really grabbed can my attention as it delved into how a Christian can play such a violent game, in which they know they will at some point injure a fellow player.  “…while the game is violent, all players on the field know the rules and agree to share the risks equally…” p. 37

From there it took a good long look at how faith impacts players, coaches and their families through interviews and personal stories. It’s a true study of the intersection of football and faith. I learned so much about many players and coaches that I had only known by name and team.

If you love football and want to take a look at the players outside of stats, scores and the usual media coverage, I recommend checking out Men of Sunday and get another perspective of the sport and its players.

Disclosure of Material Connection: I received this book free from the publisher through the BookSneeze®.com book review bloggers program. I was not required to write a positive review. The opinions I have expressed are my own. I am disclosing this in accordance with the Federal Trade Commission’s 16 CFR, Part 255 : “Guides Concerning the Use of Endorsements and Testimonials in Advertising.” 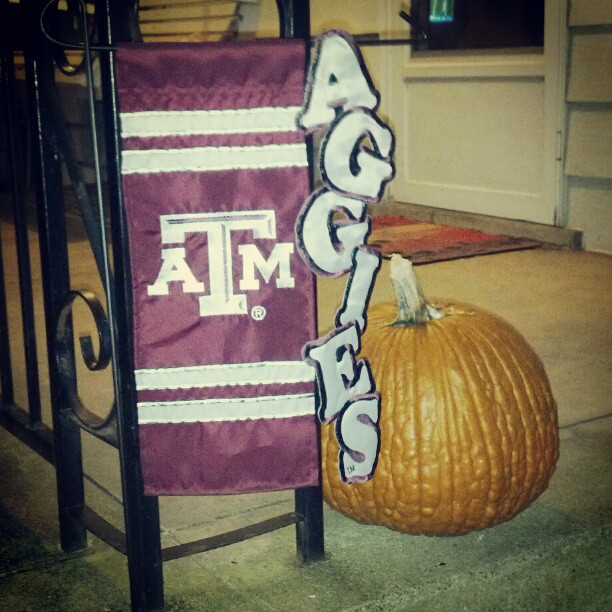 Back in August, I put my Aggie flag out by my porch.

I put it out feeling strongly we’d struggle this year. First year in the SEC. New coach. Everything in general said this would be a losing year. I didn’t care… I am an Aggie in my heart and in my blood. I’d fly my flag with pride.

Then… then we started winning. What?

Then Heisman talk started for our Freshman QB “Johnny Football.”

I started getting high fives in the bar on Saturdays, when I wear my Aggie gear to work.

Even more high fives. Even more Heisman talk. Stronger talk. Stats started to be thrown around. Texas A&M has been making waves this year. Ranked in the Top 10 going into our last week of regular season play. BCS bowl speculations.

Tonight, we go into our game against Mizzou — fellow former Big XII team now in the SEC. We’re favored to win, but I know better than to just expect it. Look at Alabama, Oregon and K-State this year alone. 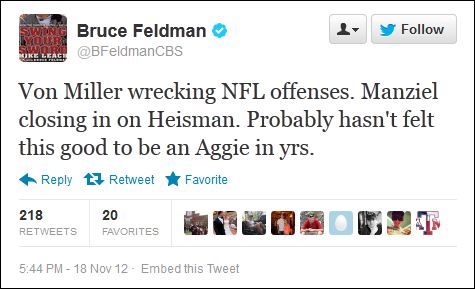 Win or lose. Always an Aggie.