When I was in elementary school, we’d get to occasionally go to the high school pep rally’s during football season. I’d stare in awe at the “flag girls.” I wanted to be one of them when I got into high school. 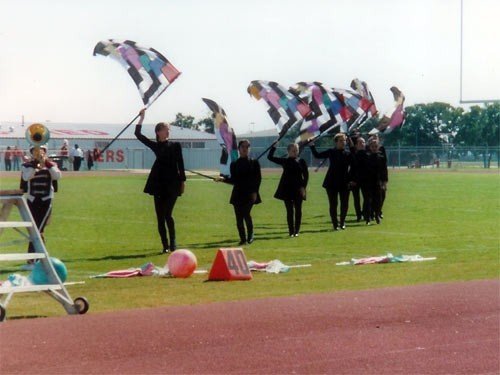 That’s me in the front. I was in flags for two years… could have been three years if I hadn’t over-stressed about how bad I wanted it (life was seriously GOING TO END if I didn’t make it) and pretty much sabotaged myself in tryouts as a freshman-going-into-sophomore-year. But, hey, HUGE lesson learned, and it made me appreciate being in flags my junior and senior year even more.

I. Loved. It. I literally felt SO alive when I was out there performing, flag in hand. And I was GOOD at it. I was even almost (ALMOST) recruited to go to Baylor University as a flag… but when I said they’d have to pay my way to go to Baylor, I never heard back from them. (Because, yeah, you’d literally have to pay me to go there. Sorry.) So after my last parade my senior year, I hung up my flag and never pulled it back out. 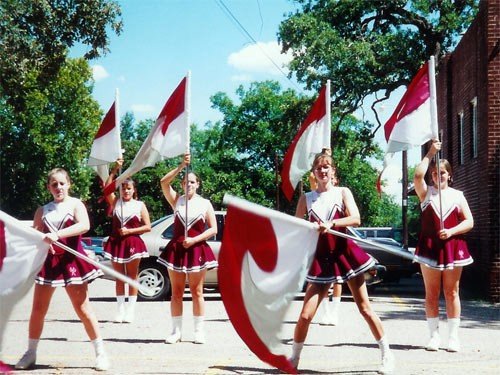 I confess, I kept a flag after graduation. I felt guilty about it until I heard the next year they got all new flags and poles. Then I wished I’d snagged a couple more as keepsakes. ;)

My flag has been in a box, and my poll… well… it made moving clothing from one place to another easy. Hang it from a couple bungee cords in the UHaul, and you have a make-shift rod for hanging clothes.

But still… when I see a parade, or if I got to a high school football game, my eyes continue to gravitate to the flags. In college, as people around me would poke fun at the twirlers and flags in the other band at half-time (since at TAMU we have a military band and, as such, no flags or twirlers… and Aggies can be kinda cruel to other bands because of that), I would still stare somewhat wistfully, remembering my days with a flag in my hand.

I hear a song on the radio that we did routines to, and I find myself trying to remember how our routine went. Or I hear a new release that is just ripe for a performance, and I find myself writing a routine in my head. I guess you can take the girl out of flags, but never take the passion for it out of the girl.

I’m on an extra-big health kick right now, spurred by my recent (and on-going) fight with sinuses. I force myself to work-out every day, and since its been cold outside, that exercise has been in my little office dancing around to music. Today, though, the sun was shining and the temperatures hit the mid-70s. I went outside, and I found myself digging around in the garage.

It took a few minutes, but slowly my favorite moves came back to me. A few fundamentals I had to really think about. But before I knew it, though, my posture was straight. My eyes were up like they were looking at a press box. And I found myself pushing myself to be as graceful and fluid as possible in my moves, all with snapping the stops perfectly. I found I could even remember the tosses, though the catches were a LITTLE shakier than I like.

I literally laughed out loud at one point. I hadn’t done this is 12 years!! And I found myself loving it just as much as I did back then!

I foresee this becoming a regular thing in my exercise routine. It certainly works your upper body! And just the joy I pulled from it… that’s the best medicine of anything.

Do you have an old passion you’ve left behind? Have you considered picking it back up?

Yesterday, my husband and I had the pleasure of spending some time visiting with George Gruhn of Gruhn Guitars. We took a friend’s guitar to the store to see if they would be interested in her line of guitars, never expecting to spend such quality time with a guitar expert.

I plunked around with a guitar in high school for awhile. My husband is a piano player. On a whole, our guitar knowledge pretty much extends to what we see our guitar-playing friends use and do. And, frankly, I know I’ve never had any interest in extending that knowledge. However, when we left the store, we left with this odd, new passion and interest in guitars in general. Why? Because Mr. Gruhn took the time to really explain guitars to us.

He taught us how the wood effects the sound. He explained what types of wood are best, and in one case even told us when a certain type of wood began to be used in guitar building. We both soaked it all up. Every word. Things that meant nothing to me before suddenly not only made sense, but seemed common sense when explained with the care, passion and knowledge that Mr. Gruhn spoke.

Photographers know their equipment. They know F-stops, white balance, aperture and focus.Â  Writers know words. They craft them with a skill beyond noun, verb, pronoun and prepositional phrases. Mechanics know cars. Car collectors know every nuance of every change in body style through the years. Accountants know math and money skills.

When you talk to someone who knows their craft, who truly loves what they do, some of their passion will inevitably rub off on you. You’ll find yourself learning and remembering things you never really thought you would need to know. Perhaps you DON’T need to know it… but in that moment, as that person is educating you about this thing they love, you feel you do need to know.

I have had time to sit and think about this afternoon, and its made me wonder: What is my passion and love? What is that thing that I love to tell people about? Am I sharing my passion with others with a skill and confidence that will carry me where I want to go?