Last Thursday, I was flipping through my parent’s copy of my hometown newspaper. My eyes landed on a headline that the Glenn Miller Orchestra would be coming to town in a week.

For one thing, I do happen to have a love for “big band” music. I was in band in high school (I was pretty good, too!) so my appreciation for the music is more than just enjoying it, but for the dynamics of playing it. For another, I didn’t even know the Glenn Miller Orchestra existed still, much less that they toured!

I was geeking out in the best possible way. Ever. A fact that friends pointed out to me rather gleefully.

I couldn’t wait to tell my husband about it, to which he was instantly sad to not be here in Texas with me to go as well. (Even if he’d been here this last week, he wouldn’t have made it due to his having to be back in Nashville to catch the bus to a gig himself in a day!) Tickets were only $10… $10!! I figured I had better purchase in advance, surely they’d sell out. It’s GLENN MILLER ORCHESTRA!

So, on Monday, I made sure to make it to the Chamber of Commerce office to purchase tickets for myself and my parents to attend. I told the woman at the desk that, “I am SO STINKIN’ EXCITED!”

I got in the truck after obtaining the tickets and immediately posted to Twitter: I can not wait!! http://picplz.com/n5WX

I suppose I’ve already conveyed my ridiculous amounts of excitement by now, but… this was special. I go to a lot of concerts. I see a lot of live music. This was DIFFERENT.

Thank you, Glenn. That’s exactly it. This was going to be a night with a band with a personality. A band that harkened back to days when things were both simpler and harder. It would be music that was pure. No auto tuning. No tracks. These would be musicians who knew their instrument. Who were showing a talent that comes from years of practice, diligence, love and respect for the music itself.

Yesterday came with a terrible cold front hitting the area. A layer of ice covered everything as the sun came up on the day that I’d been so excited for for a week. At noon, the temperature was 22° with a wind chill of 7º. I prayed that the show wouldn’t be canceled or rescheduled. It didn’t make sense for it to be, but you just never know sometimes…

Luckily, the sun came out mid-afternoon, and what ice remained melted under its rays. I found my ability to concentrate going South.

Finally, it came time to go to the show. It was at the Cameron ISD Performing Arts Center. (Everyone can thank me now for putting it in Foursquare as of last night.) I’d only been there once or twice before; it was built long after I graduated from C.H. Yoe High School. It’s a gorgeous facility, and it beats the heck out of shows in the old cold gymnasium!

My parents and I grabbed front row seats, because I absolutely had to take photos. (DUH!) We (okay, fine, I) waited impatiently for the music to start. The theater was no where near as full as I assumed it would be. Cold temperatures kept a lot of people home, I am sure. Being married to a musician, I understand how much the audience can affect a performance, and my heart sank a little to see such a small crowd. I hoped the musicians didn’t think they weren’t appreciated. I hoped they wouldn’t regret their coming to this small town.

Finally, it was time. The band took the stage, and I was instantly impressed. Musicians played multiple instruments. They all wore suits and ties. Every single one clean cut and total professionals.

REFRESHING change from what I usually encounter at live music shows. At one point, band leader, Gary Tole, commented how the cold weather does make it harder on the instruments, but being professionals they all know how to compensate for it.

Because for the audience? It was almost magical. I text messaged with my husband, sending him photos via cell phone through the evening. I was so blown away, and couldn’t wait to fill him in on it until after the show. (So I didn’t wait. Ha!)

I found myself being transported to a time that I never lived. “Moonlight Serenade,” “In the Mood,” “Chattanooga Choo Choo,” “Goody Goody,” “Elmer’s Tune,” and countless others. A medley of armed forces tunes, during which veterans were honored and invited to stand, brought tears to the eyes. For two hours (minus one short intermission), the band entertained our small crowd. I wondered if there would be vocalists, and there were. Brian Hemstock and Valerie Duke each took turns singing songs of yesteryear. I found myself appreciating every word and lyric more than usual. These fantastic singers who sing for the love of the music, not for the fame.

“Taylor Swift, eat your heart out,” I thought as Valerie nailed one particular note.  You don’t need costumes and video walls to put on a great performance. You just need confidence and talent and poise.

The night ended with a gorgeous rendition of “America the Beautiful.” The standing ovation, small as it was, was well deserved. I wanted to stand ON my chair to applaud. But I thought the powers that be at CISD might frown on it.

As we left, one woman commented that she almost didn’t come due to the cold. But she couldn’t have been happier than she braved the elements to come out.

OH? By the way. Those $10 tickets? A steal. The show was priceless.

Thanks for coming to little ol’ Cameron, Texas, Glenn Miller Orchestra! Come back some time. (Or… you know… Nashville would rock, too. teehee) 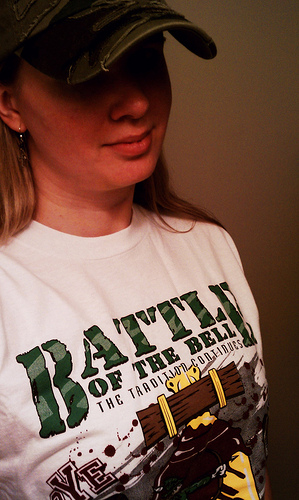 That picture is my attempt to be all “bad ass” and stuff. It didn’t work, but I am wearing my Battle of the Bell t-shirt for tonight’s big game.

Battle of the bell?

Yes, tonight is the night my high school plays its #1 rival, a competition that has long been called “The Battle of the Bell.”  The Cameron Yoeman take on the Rockdale Tigers, and while I live over 800 miles away, I still feel that old competition course through my veins.

According to the History of Rockdale, Milam County Website, (and, yes, I am quoting word-for-word here):
The Rockdale-Cameron game is one of the state’s best rivalry games.Since 1954, the winner has proudly rung a big brass victory bell, which is symbolic of Milam County football supremacy. The bell, taken from a steam locomotive, was donated to the two schools by the Rockdale, Sandow & Southern Railroad in 1954. Bragging rights to Milam County football supremacy come with the bell; therefore, the two communities encourage their charges to bring home the brass beauty for another year. Over the years the bell has helped fuel one of Texas high school football’s longest and most-storied rivalries.

That same bell was the one that we fought over when I was in high school. I was proud when the bell came back to Cameron one year, we did repaint it the more traditional half maroon and gray (Cameron) and half blue and gold (Rockdale). It didn’t last though, and each year it went back to being painted the color of whatever school had it for that year.

The bell broke multiple times over the years, and one time was actually stolen and thrown into the Little River (which runs through Milam County). I have to say, I had plenty of time even I wanted to throw the bell in the river. The rivalry could get as ugly and nasty as any college rivalry until I had times I wondered if it was worth the stress. However, at the end of the day, I will always have an interest in the rivalry.

Hopefully tonight we will make it win 39 in 56.

This is one of the very few years Cameron and Rockdale will battle without being in the same district. In fact, currently Cameron is ranked 2A, while Rockdale remained 3A in the recent district realignments. In the past, this game has been left for the last game of the season. Often its even been the game that decided which team would move into playoffs.

This year, it is played early and with nothing but a bell and bragging rights on the line… oh that and to move on with an undefeated season. When it comes to this game, district rankings and the years win-loss stats matter none, though. This is about heart and a deeper rivalry that Hollywood blockbusters are made from. I’ve lived that rivalry… and tonight I sit here in my old Battle of the Bell t-shirt with my school’s song playing in my head…

“On Yoe High” (Written by Portia Kruse and Francis Cox) Praise to our school we sing, each his loyal honor brings; Together we the Yoemen stand, to spread our praise through all the land.  To represent as best we can, in all our competition, and our hopes, our pride, our love compound in you, dear school.

Years The Bell Has Gone Home to…