When I got up yesterday morning, my day was fairly clear cut. Work, then head to the Grand Ole Opry where my husband would be playing that night, then off to a writer’s night to support friends. A good day for sure, and my anticipation of going to the Opry was high. 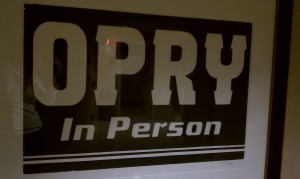 However, upon getting up, my anticipation plummeted. A message came through that no guests would be allowed at the Opry after all. That’s not that unusual when the Opry is being held at The Ryman, but there was no problem with my attending the last time they played on a Tuesday night. My expectations were high, and they crashed down pretty hard and fast.

I was then left wondering what I would do while my husband played the Opry. I figured I’d either wait in the truck, or I’d stroll around Broadway for awhile. Maybe I would just grab a bench outside of the Ryman and people/tourist watch.

Poking around on Twitter and Facebook, I stumbled upon a headline stating that Merle Haggard had canceled all his September dates due to illness. I admit, I briefly wondered who would be filling in for him on all those shows or if they were just completely canceled.

As such, I was and wasn’t surprised when my husband’s phone rang and it was their manager asking if he could drive the bus (since he is also a bus driver) that night to a last-minute show the next day (today). Suddenly, our whole evening got turned upside down, and our plans went from a fun night out to logistics of the Opry, dinner and then getting him to the bus to pick up the rest of the band. (We are a one-vehicle family, so its not like he could just head out without me.)

Thankfully, we had no plans for the next day and we weren’t out of town.

People invite me to things and ask me to commit to events weeks in advance. This precise phenomenon is why I rarely will make ANY commitments. You never know when plans have to change due to a last minute show!

We quickly figured out our timeline for the evening, and we could feel ourselves shifting it into high gear. We both grabbed showers, he packed an over night back, and we headed downtown in time for the Opry. I walked him to the backdoor of the Ryman and wished him good luck. While he went in, I strolled off on my own for the next hour…

…I got maybe 100 yards away and my phone rang. My husband noticed my name was indeed on the list to get in! He said to come back right away. I did a 180 and headed back, and much to my delight I got to go in and see my husband perform! 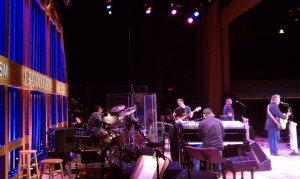 After the Opry, we finally got to sit down and eat. However, we found ourselves scarfing down our food, still in hurry-hurry-hurry mode. We’d been in fast forward for the last several hours, and we found it almost impossible to slow down. We agreed that we would just head over to the bus early. That way we could both chill out and relax.

So, we went and got him loaded up on the bus. He did all his pre-trip checks, and we said good-bye. I followed him out of the lot. I went home; he headed to where the band would meet him to head to their new show.

Here I am, sitting at home, marveling at how much everything changed in the span of a few hours. It’s not the first time its happened, and it most certainly won’t be the last! I can’t complain about it at all. Its just one of those things about the life that you have to take in stride. Its one of those things that keeps it all interesting.