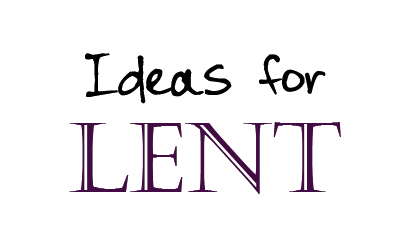 I’ve spent a lot of time the last week, contemplating Lent and what to “give up” for it.

Did you know that today is considered “Fat Thursday?” I didn’t until I searched “lent” on Twitter. Which of course sent me to Google. And the only real information I could find on it was from Wikipedia.  According to that page, it is a Polish and German tradition. It’s not to be confused with “Fat Tuesday” but its not all THAT different, as best I could tell. Apparently you’re supposed to eat a lot of donuts today. Which isn’t going to happen for me, despite having a German heritage. But if you partake, rock on and enjoy. Have a cinnamon and sugar covered one for me.

But like I said, I am thinking a lot about Lent and I had a few ideas. Feel free to throw ideas out at me, or take some of these for yourself…

No, I’m not doing ALL of these. But maybe I can take a bit from here and there on this list. Maybe I should just resolve to “do better” and “make fewer excuses.” No matter what, I want to better myself.

What ideas do you have? What are you planning to do for Lent this year?