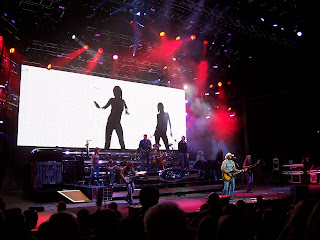 Last night, I was lucky enough to get to attend a concert as a guest of one of the headliner’s band members. A group of us ladies got together and we all drove out to see the concert, and then we had All Access passes to visit our friends in the band after the show.

It felt equally weird and natural to me to do this.

The biggest thing that felt weird: my husband wasn’t there. I kept feeling like he SHOULD be there. For one thing, these guys we went to see are actually more his friends than mine. I know a few of them probably only know me as being his wife, and I am so okay with that! But for another, he’s a touring musician and he should be touring right now! And the fact that he’s not right now… my being at a show, backstage, without him there just made me feel a little sad. Because he thrives on the music, the travel, the energy of the fans, etc., and it feels like its been taken away from him for the time being. And that just makes me sad.

But, in the same breath of all of that, it feels weirder to go to shows and NOT be backstage these days. So in a lot of ways I felt completely at home. I go and end up taking notes more on what guys are playing, how the lighting is set, what the stage layout and set look like, listening to the mix, and then just watching the fans have fun. I think I almost blew my husband’s phone up sending him text messages all night!!

I know, now, how things go when putting on a concert. I understand things that I used to take for granted. Things that amaze some are just “the way it is” to me. And I like that it is that way! Concerts are still a ton of fun to attend! They always will be! I’m just saying that I see a lot of things I used to not see, and it feels less like a “special occasion” and more like just the way my life is.

Among all of it all, I got the pleasure of watching a band member and his wife interact after the show. I fear they felt I was staring! But, I’m very much someone who likes to watch people, and take in things like body language and the way people interact with each other. It’s interesting to me, and I’ve learned you can learn a lot if you just sit quiet, listen and observe. 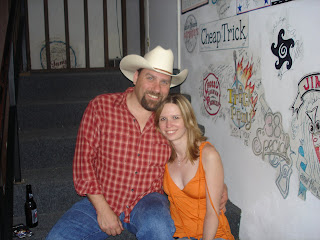 Last night, as I watched the couple, I wondered often if others view me and my husband the same way. As a couple very much in love, and who know its a crazy life but embrace it with as much (if not more!) vigor as someone who has a regular 9-5 job. I wonder if I appear as at home and close with my husband’s band mates as this other “musician’s widow” is in her camp. I took notes on how she approached things, as she’s been in this life for much longer than I have been. I felt I could perhaps learn something through my observations.

In the end, I had a lovely time out with the girls. I saw a wonderful (intense!) show, and I got to get a taste of another camp that is out there pounding the pavement along with the many other acts touring the country today. It was fun! And I can’t wait to do it again… just next time: I want to be going to see own husband. ;)