This morning, as my husband and I were on a nice drive through the country, a car started to tailgate us. My husband commented that they needed to back off, and we were frustrated at how they were driving. It’s not like we could do anything on a two lane road with a car in front of us, but still the girl stayed right on our back bumper.

We turned; she turned. We stopped at a stop sign, then went when it was clear. She, however, cruised right through it behind us. We finally opened up to a four-lane and were glad she’d be passing. She didn’t get in any hurry to pass, though. We were slowing down to enter a parking lot when she finally cruised past.

That was when I saw it. Right there in the middle of her back window. A Longhorn sticker.

I have a Former Student sticker for Texas A&M on my back window.

This is not the first time I’ve had a Longhorn tailgate me (which is amusing considering that I’ve never been known to be “slow.”) I’ve had a Longhorn heckle me in bumper to bumper traffic through an open window. When in college, I even had someone try to run me off the road, flashing a horns symbol at me as I tried not to go into the ditch and hit a road sign.

At the heart of it all, these events scare me even more than they anger me.

Seriously, I am the first to say Texas is a good school. I respect the school and the education people get there. The rivalry, for me, generally exists on the field. And as I said in a previous entry, I’ve always viewed that particular rivalry as one that has an undertone of respect (unlike other rivalries).

Sadly, you do have those on both sides that fail to remember that, and therein lies my fear. Its to those people, I plead… no matter what, keep it off the highway. A school rivalry is NOT worth someone’s life — be it you, your rival or an innocent bystander. We all put stickers on our vehicles to personalize them, to show allegiance to our schools, organizations, businesses, politics, etc. They are not there to be used as a target. Don’t tailgate, heckle, cut-off, or try to sideswipe someone because of their school allegiance. That’s dangerous and has potential consequences that are bigger than any rivalry.

So to the young woman who chose to tailgate us on the way home… grow up. We’re not even in Texas. We’re not playing today. I have nothing against you personally. I actually respect your school (just not the actions of people like, well, you.) And, at the end of it all, my vehicle is over twice as big as yours. If you had rear ended us in a sudden stop situation, I would have gotten out of my truck and run over to see if you were okay.

Then (assuming you were) I’d slap you upside the head for hurting my truck. Because, really, that would piss me off. A lot. A lot more than any rivalry. Because seriously… this crap does not belong on the highway. Leave it on the football field. ‘Kay?

For some reason, my mind and body decided it was time to get up after only maybe 3 hours of sleep. Yeah, I don’t get that either. However, after tossing and turning for a couple of hours, I decided it was just silly to lay there. I might as well start my day like any other normal person would do.

I am very saddened to be following this story: 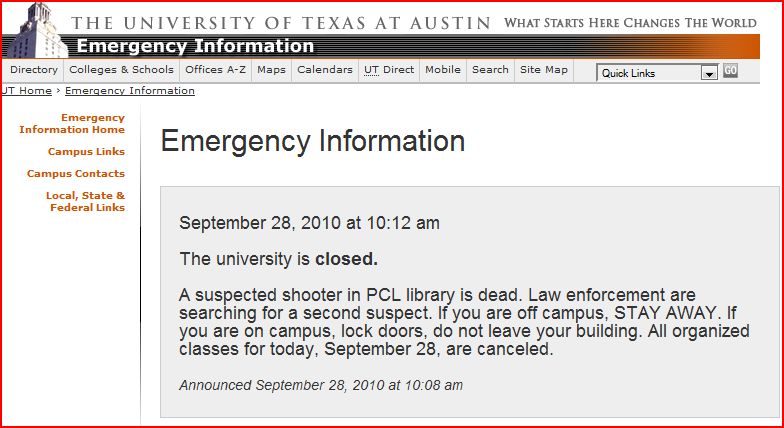 I may be an Aggie, but my heart is going out to the University of Texas right now. I’m trying to follow this story via Twitter as best I can, and I hope everything comes to the best conclusion possible.

See, in general, the rivalry between TAMU and Texas is a respectful one. In general. You have your people on both sides that can be nasty about it, and they will lose sight of being respectful. But when its come to things like this, both Universities have supported one another in the past, and they will support each other in the future.

I will be following this to the end, with thanks to the invention of Twitter. I am sitting here at my desk wrapped up in my Aggie Snuggie, feeling very overwhelmed by the things I need to do. But in the same breath, I feel a sense of relief that it appears that at the moment, the University Police have things under control.

For all UT students, faculty and administration, I send thoughts and prayers.