I’ve attended a lot of concerts, but there are just certain shows I still want to attend. Just a few examples: I’d like to go to Ziegfest in College Station, Texas, some day. I’d love to see The Wolf’s Den at Mohegan Sun in Uncasville, CT. And, believe it or not, it kills me to miss the many county fairs back home in Texas each year.

This last weekend, I got to scratch one concert event off my “concert bucket list.” The Tennessee River Run. I’ve always wanted to go, and on Sunday I got to be there to see my husband play it with his artist.

Our day started super-early. My husband was driving the bus to the show, so we left our house a little after 4:30 am. It is a little over half an hour drive to the bus lot, and after picking up the bus, I followed my husband down to where we would meet everyone else. 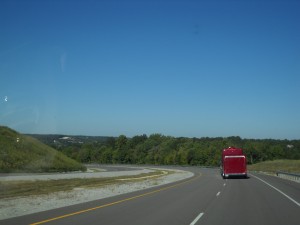 Once everyone was loaded up, we made the three-hour drive to Savannah, TN. (I followed the bus in my truck.) What a BEAUTIFUL drive!! I’d love to make that drive again just for fun. We’d dip down into hollows, then climb back up to where I’d feel my ears pop. All while keeping my eyes on the back of the bus trailer.

As we got close to the Pickwick State Park, hundreds of motorcycles started coming at us. I read around 1,000 bikes went on a Motorcycle Poker Run. It was incredible to see! If I’d not been driving, I’d have taken a video of it.

We pulled around to the stage, and immediately saw several friends already sound checking. Part of the fun for this show was that my husband and I have dear friends in other bands that performed that night. As soon as we got parked, it was hugs all around.

I joked with a couple of our friends, “What? We have to drive three hours to see you these days!?” I’ve even seen friends for the first time in ages at shows in Texas… when everyone is hitting the road hard, you literally do have to travel to a show to see your friends. Nashville can become a ghost town (in the musician’s world.)

My husband helped off load the trailer and then sound checked.  While he did this, I meandered around taking in the beauty of the park. It was sooo peaceful and once I got in one small area of trees, even the thump of music coming from sound check faded away.

Once he was all set up, my husband and I went over to catering for a bite to eat. After a quick lunch, we went and grabbed our bags. I’d packed a change of clothes, and my husband had his show clothes to change into. We went over to catch a ride to the hotel from the runner. 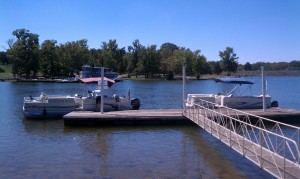 A “runner” is the person and vehicle used to carry band and crew members to the hotel from the venue. Sometimes that ride includes trips to a store or a restaurant. (I’ve even been along with my husband when the runner gave us a ride to a liquor store!)

This time, our runner was a PONTOON BOAT.

The hotel was just across a little cove from the backstage area. So, we hopped on a boat and cruised across the water to another dock where we got off and went to a hotel that did not have a room with a bad view. It was made to where every room over looked the river. I didn’t think my husband and I would get any sleep wanting to over look the water!

However, we were both exhausted, and it didn’t take us too long to both fall into a deep sleep. We slept a little over four hours before getting up to shower and get dressed for the show. The second act was already on stage, and my husband had about half an hour before his show by the time we caught the runner back.

A quick (delicious) dinner of barbecue, and off to the stage we went. 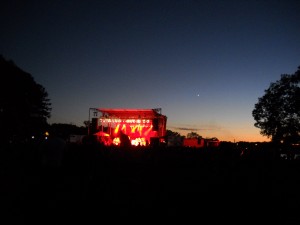 As the band took the stage, I slipped out into the crowd to take a few pictures. I walked all the way around the crowd to watch from the back, then pushed my way to front of the stage to snag a couple close-up shots. I made my way back to backstage, and I spent the rest of the show standing side stage.

Almost all of the band had family in attendance, and my husband’s artist made sure to give every single one of us a shout-out. I have to admit, it always makes me smile when that happens.

Their set and encore seemed to just fly by, and I was sad to see their time on stage end. I do love their show…

But, as the show ended and the band tore down their gear to make way for the headliner, my next priority took center stage. I bolted to my truck to tune in to my college football game — just in time to hear the winning touchdown. 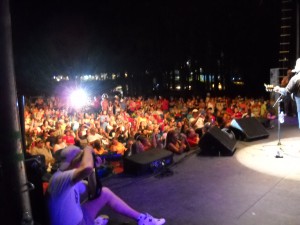 If anyone was there, I was the crazy girl jumping up and down beside a pick-up backstage… doing my own version of a touchdown dance.

I had been told the band would be leaving immediately after their show, instead of staying until the end. So as soon as my husband had finished tearing down his gear and he got the bus moved to be ready to leave, we caught the runner back to the hotel to get our bags and so my husband could change into more comfortable clothes to drive through the night.

We got back just in time to find out we would NOT be leaving after all. So, my husband shut down the bus. I shut off my truck (that I had already pulled up behind the bus), and we went to watch the show from side stage.

It was fun to watch our friends at work, and the show was great! I, personally, was tickled pink to stay and see the rest of the concert. Like I said in the beginning, I’ve always wanted to attend the River Run. 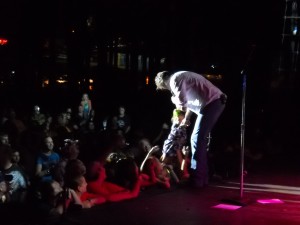 As soon as the last song ended, and the backstage barricades came down, we were in our rides getting a police escort out of the park. The three-hour drive home began.

I talked to my Mom for much of the drive, as I stuck close behind that bus. However, in some of the areas, I lost all cell service and would have to call her back.

As we got closer to Nashville, I peeled off the interstate to head home. My husband was headed to another show the next day.

I talked to him off and on through the night as he drove to Bristol, TN. Another day and night, another few dollars. As everyone says, “Livin’ the dream.”

I had a wonderful time, though, and I am so happy to be able to say I’ve been to the Tennessee River Run. Next year is its 10th anniversary, and I wouldn’t mind going again! We will see, of course, but its fun to think about.