It’s no secret that MDA is a cause I support heavily, primarily due to my nephew battling Duchenne Muscular Dystrophy. (I talked a lot about that as the 2012 Labor Day Telethon approached.)

In 2010, I made the trek to Dallas and Cowboys Stadium for the MDA Stride and Ride (which was what it was called then).

Then in 2012, I participated in Waco’s Muscle Walk on the Baylor Campus.

Then this year I got to be a part of the Music City Muscle Walk, here in Nashville. I’m usually out of town when it is held, but this year I was in town. As a bonus, my husband had a random Saturday off and got to go as well!

It was AMAZING. I gotta admit, it felt a little strange to not have my nephew, brother, niece, sister-in-law and parents there. But I couldn’t stop smiling as my husband told anyone who would listen about our nephew and all he’s accomplished despite fighting Duchenne. I hardly had to say a word the whole day… which was good because events like the Muscle Walk get me and I walk around with a lump in my throat the whole time.

As of the end of the walk, over $97K had been raised. I know during the walks, money does continue to trickle in so I’m sure the FINAL final total will be higher. That’s AMAZING.

There were people everywhere. Our team captain has participated the last four years and she said this was without a doubt the largest walk to date. I think I heard that there were well over 1,000 people walking that day. I forgot that most teams dress similarly. In Waco, we all wore camouflage. In Dallas we had matching t-shirts. I totally spaced our dressing alike this year. Next year… next year we will have a theme. And it will be awesome. And we will raise even MORE money. And have an even bigger team.

Seriously, though. Wherever you are… look for a Muscle Walk to participate in and be a part of this amazing event. If you’re thinking, “I don’t do walks… I’m not in shape for that!” Our team captain recently had knee surgery, and I’m still limping from a “its not a good story” foot injury. It’s not a race. It’s low physical impact, but huge emotional impact.

Well, actually, it IS high physical impact. The money raised at the Walk has huge physical impact potential for those fighting muscular dystrophy, as a cure is being sought every single day. You don’t have to raise thousands of dollars. You can raise as little as $5 and still participate. Just be there. Just go and see what its about. You’ll leave with a full heart. I promise. The following is an email I sent out to friends and family yesterday… I thought I’d run with it for a post today. 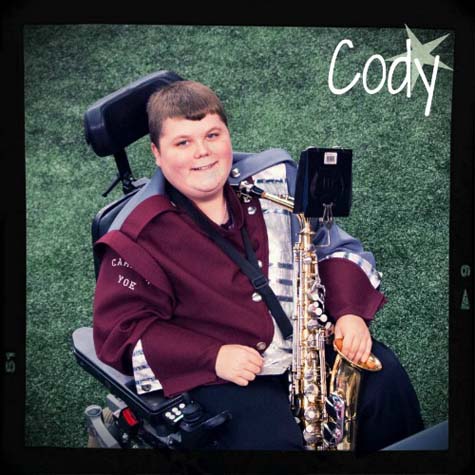 Every year, the Muscular Dystrophy Association holds “Muscle Walks” across the country as a way to raise funds for the organization. As you (may or may not) know, my nephew has Muscular Dystrophy. Specifically, Duchenne Muscular Dystrophy. He’s done amazingly well through the years, and if anyone ever asks me who my hero is… I’ll answer without hesitation that he is my hero. I adore that young man.

He’s a freshman in high school, and he’s a member of the band. And despite being in his mechanical wheelchair, he even “marched” at Cowboy’s Stadium during the state championship game in December! To say I had tears in my eyes would be an understatement. He plays saxophone and wants to be a chef someday. And NOTHING stands in the way of his dreams. Especially not Muscular Dystrophy.

Needless to say, MDA is an organization very, very, very near and dear to my heart. At the beginning of each year, my family participates in a Muscle Walk to help raise funds for MDA.

Let me say with 100% certainty, MDA is an AMAZING organization doing amazing things for everyone dealing with all the different types of Muscular Dystrophy.

I am not going to be able to attend the Muscle Walk this year, but I am still a very proud member of our family team. Despite the fact I won’t be actually walking at the walk, I’m looking for people to support me, our team, and MDA.

I totally and completely understand if you pass on this. I know I find myself having to pass on friends’ causes from time to time because I just CAN’T. Nonetheless, I thought I’d ask. Even $2, $5, $10 will help. A lot. Every little bit adds up.

If you can, just click here to make a secure, online donation before March 2, 2013.

Make a Muscle and Make a Difference.

If the link above does not work, please cut and paste the address below into the address bar of your Internet browser.
http://www2.mda.org/site/TR?fr_id=4162&pg=personal&px=1061702