We all have those things we do that make no sense, and yet we do them any way. Its as if in certain instances, logic no longer has any effect on us.

Today, I did a big one. I even twittered about it AS I WAS DOING IT.

Why am I sitting on my bed, checking the internet on my phone when my laptop is a foot away? — @niseag03

Yes folks, I spent over an hour reading BlogHer and my email and my Facebook and my Twitter feed ON MY PHONE, cursing how cumbersome it is to Share an article on Facebook via phone, all while my laptop sat open less than a foot away. Can someone explain to me what part of any of this made any sense? 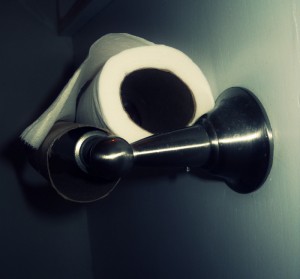 One of my quirks that my husband finds particularly entertaining is the fact that I rarely will change the toilet paper roll. Its such a simple chore! And yet for whatever reason, I hate it and just don’t do it. He teased me that while he’s on the road, I HAVE to change the roll. Unbeknown to him (until now, ha!) I still very rarely change it. If I’m feeling particularly logical, I will. But on a general basis… not so much.

And yes, I did go take a picture of this phenomenon to use as a photo in this post.

In a similar vein, the bad habit I have that gets on my husband’s nerves is how, when cooking, I’ll toss all my trash in one of the sinks instead of putting it in the trash can. The difference in distance is maybe two steps, and yet I consistently do it. Even though I know it gets on his nerves! Its a bad habit. It makes no sense. I am guilty.

So please tell me its not just me! What are some of your more nonsensical moments?